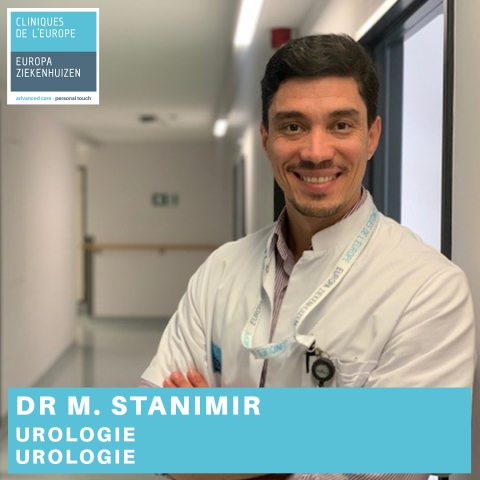 After his training in general urology in the hospitals accredited by the Catholic University of Leuven (UCL), he obtained the degree of Specialist Doctor of Urology in October 2016.

Scientific work is also part of his skills resulting in the completion of a doctoral thesis (PhD) that he defended in 2017.

Subsequently, he performed a fellowship in robotic surgery at the Europe Hospitals on the St-Elisabeth site in Brussels, in the team coordinated by Dr Christophe Assenmacher, (Head of the Urology Department of the Europe Hospitals). Since January 2018, he had the opportunity to work at the CHU-UCL Namur Mont-Godinne site where he acquired a great clinical and operative experience in the field of general urology with a specialty in oncological Urology.

His professional activity has increased significantly since his arrival at the Hospital of Mont-Godinne, which has allowed him to put into practice the knowledge and experience he acquired during his training. He is passionate about urologic surgery and especially urologic oncology.

From October 2018 to June 2019, he had the opportunity to follow the courses of Genito-Urinary Oncology in the Faculty of Medicine Paris Sud in collaboration with the Gustave Roussy Oncological Institute (Paris).

Since January 2018, in addition to the surgical management of general urological pathologies, he has performed several types of robot-assisted surgical procedures (radical prostatectomy, cystectomy with urinary diversion according to Bricker, nephro-ureterectomy, radical and partial nephrectomy, pyeloplasty and promontofixation) that have been highly appreciated by the medical collective and by the patients. In addition, while performing these surgeries, he had the opportunity to perform some robot-assisted surgeries at the locoregional level.

Dr Stanimir is from Romanian origin. He is fluent in French, Romanian, English and Serbian. He has learned Dutch in depth, which allows him to take care of a lot of patients.

The rigor and the methodical spirit acquired in the field, the good capacity of coordination in the team, the individual and personalized approach of the patient, the ambition and the motivation to reach the fixed objectives are, in his opinion, his main qualities.